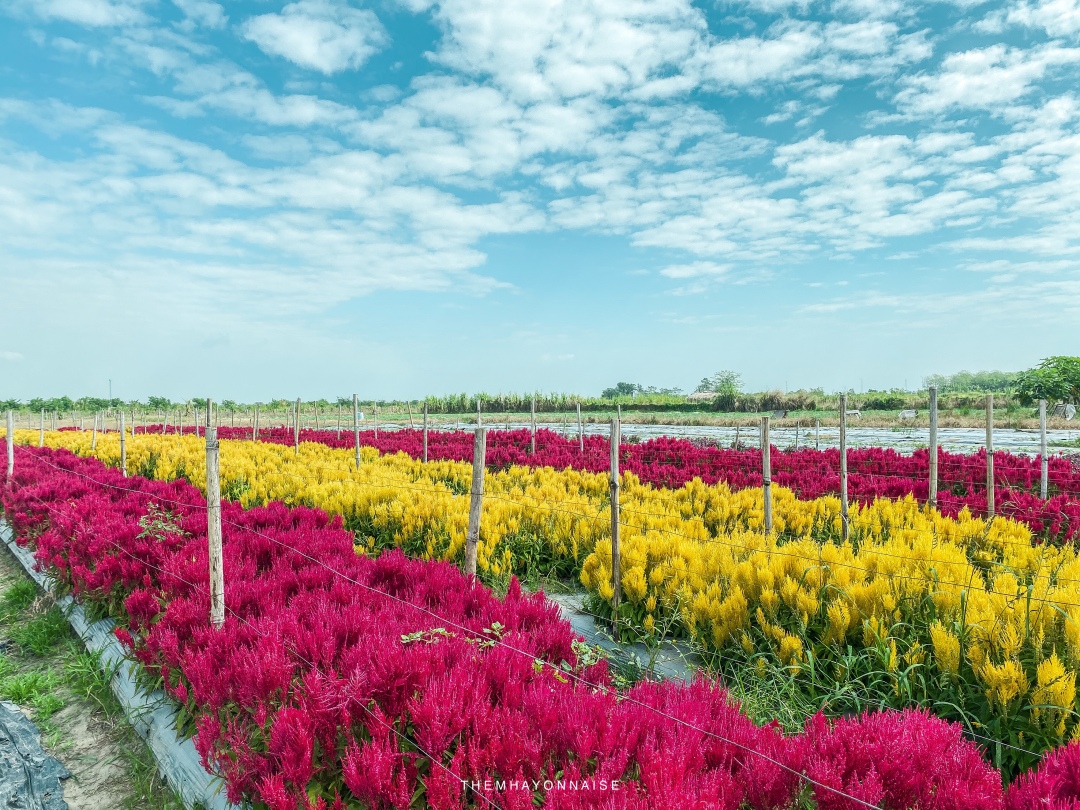 ★ I’m moving to a new site! It’s been two fun years since I activated themhayonnaiseonline, and I thank you for giving it a wonderful life. I thought it’s too late for moving to a new home, but I’m here to take risks! I mean, why not? You’ll still visit me there, right? Let’s connect and read new stories at THEMHAYONNAISE.COM!

Farmers Love Agri Farm (also known as Sunflower Farm or Flower Farm, if you search “where to go” on Google. Hehe) is one of the most-visited tourist spots in Tarlac these days. Apparently, people love flowers in their travel pictures and all because I notice flower farms are currently in trend.

As for me, I just love looking at these colorful views. If not for the blog, taking pictures wouldn’t be in my to do list, really. There are times, I have to admit, that I forget to take pictures because I was enjoying the experience so much.

Page contents:
1. ABOUT TARLAC
2. ABOUT FARMERS LOVE AGRI FARM
3. HOW TO GET THERE
4. TRAVEL TIPS

I call this trip to Farmers Love Agri Farm a tiis-ganda trip obviously because it was too hot when we visited. We went there on January so I’m sure it’s even hotter during summer season. But I suggest you go there between March to May as these flowers usually have their full bloom within these months.

I think it’s best if you visit very early in the morning or before sunset to avoid the peak hours of sunshine. Plus if you’re here for the ‘Gram, morning and sunset photos will never fail.

I travel a lot, and one of my biggest problems is I quickly get sunburns even along my ride to somewhere. But you know what, I finally found my skincare routine best for after-summer vacays. Here’s how I take care of my sun-burnt skin. Aside from sunburns and an empty wallet, what else do I get from traveling, by the way?

Moving on, another challenge is thinking of how can you make your story interesting enough to get people to listen or read your page. Photos! People love viewing photos more than reading detailed stories, so no matter how much information you have you still have to own a technique on editing your photos. Here’s mine.

Read more of my trips in Tarlac: TheMhayonnaise x Tarlac

Tarlac is a landlocked province of the Philippines located in the Luzon island. Its capital is Tarlac City. Tarlac borders Pampanga to the south, Nueva Ecija to the east, Pangasinan to the north, and Zambales to the west. It is a part of Central Luzon, which is composed of Aurora, Bataan, Bulacan, Nueva Ecija, Pampanga, Tarlac, and Zambales.

Tarlac’s name is a Hispanized derivation from a talahib weed called in Ilokano word “Malatarlak”. Tarlac was originally a part of the provinces of Pampanga and Pangasinan. It was the last Central Luzon province to be organized under the Spanish administration in 1874. During the Philippine Revolution of 1896, Tarlac was one of the first eight provinces to rise in arms against Spain. It became the new seat of the first Philippine Republic in March 1899 when Emilio Aguinaldo abandoned the former capital, Malolos, Bulacan. This lasted only for a month, as the seat was moved to Nueva Ecija in Aguinaldo’s attempt to elude the pursuing Americans.

The Farmer’s Love Agri Farm is located along Luisita Road in Barangay Mapalaciao, Tarlac City, between 6AM to 6PM. Just four to five hours away from Manila, you can explore the fields of different kinds of colorful flowers for only P60* entrance fee per adult. Discounted rates for senior citizens and kids are P50* and P40*, respectively.

━━━━━━
HOW TO GET THERE
━━━━━━

From Manila, ride a bus going to Tarlac City and get off at Luisita. Easy-to spot landmarks: Robinsons Supermarket/McDonald’s/Starbucks. From there, ride a jeep going to Asturias and ask the driver to drop you off at the farm or Farmer’s Love Agri Farm. You can also book for a GrabCar or charter a tricycle for P70* per way.

May Vargas (@themhayonnaise) is an auditor by profession, a writer by passion, and a single mom in between. Currently based in Manila, she spends her time (well, aside from her corporate job and being a mom) blogging about food, travel, and almost anything. She tends to overshare her experiences and dramas on themhayonnaise.com. View all posts by themhayonnaise

This site uses Akismet to reduce spam. Learn how your comment data is processed.